What to see and do Exhibitions Decorative Arts

In September 2017, the Decorative Arts Society awarded our museum a Collections Access Grant for the professional photography of 63 pieces of ceramics and decorative art objects.

These pieces originally formed part of a much larger pioneering collection put together by Charles and Lavinia Handley-Read who, following a visit to an exhibition of Victorian and Edwardian decorative arts at the V&A in 1952, were inspired to start their own collection.

By 1971 the couple had gained such a reputation in the decorative art world that their entire collection was put on display at the Royal Academy. Unfortunately, Charles and Lavinia did not live to see it, dying tragically in the October and December of 1971. In the following year, their vast collection of objects was sold to museums and private collectors, which is when Portsmouth Museum and Art Gallery acquired the 63 pieces for its permanent collection.

These objects represent the highest quality in glazing and lustre techniques, along with fine examples of Parian porcelain and rare, hand-painted tiles. Shown here is a piece of Minton Parianware sculpture from around 1850 entitled Amazon, after the bronze by French artist Jean-Jacques Feuchère (1807-52). 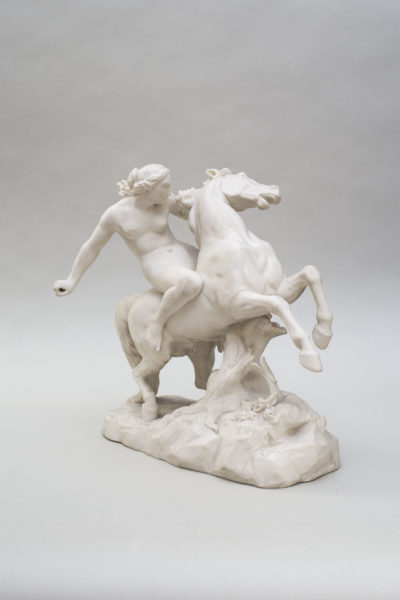 The Handley-Read group forms part of Portsmouth Museum’s much larger decorative arts collection, of approximately 4,500 objects. These include some interesting hand-painted pieces by the Bloomsbury group, such as Duncan Grant, Vanessa Bell and Dora Carrington, and an important inlaid octagonal reading table by A.W.N. Pugin. The majority of the Handley-Read pieces that belong in the museum collection are now on permanent display in the Decorative Art gallery.

Susan Ward Curator of Art said: “We are thrilled to have been awarded this grant which will not only provide continued access to the Handley-Read collection but will hopefully encourage research, greater awareness of the decorative arts in Portsmouth and raise the national profile of the museum.”