One of the great joys of museums is the arrival of unexpected, interesting and often puzzling objects or images. This was particularly true of a small group of glass plate negatives that were very kindly given to the museum in 2019.

To make any sense of them we had to have them scanned, which revealed a series of very unusual views of… well, at least a couple were definitely Portsmouth, but for some it was much harder to tell. The best way forward seemed to be to share the images with our very active social media community – a huge store of local knowledge and research resourcefulness!

One of the first to go up was this photograph: 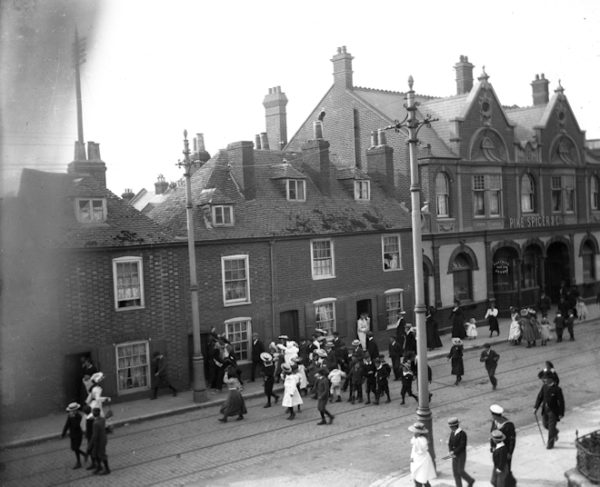 The most recognisable thing was the pub, which it often is in Portsmouth. This is the Fountain Inn, London Road, North End. At this time the brewery in charge was Pike Spicer Co., whose name can clearly be seen on the front. The houses to its left are long gone.

The real question, though, is what on earth is happening here? A really careful examination of the picture reveals that there are two North American Indians walking down the road, closely followed by a curious crowd of locals – including lots of children.

The truth was soon revealed by our social media curators: this must have been one of the visits of Buffalo Bill’s Wild West Show to Portsmouth. We had never seen an image of this before so it revealed a really interesting story.

Buffalo Bill’s show visited Portsmouth at least twice, once in 1891 and again in 1903, although there could be other occasions we have not found. The show seemed to always pitch in what was described as a sixteen acre meadow at North End, a site that was also used for the Royal Counties Agricultural Show. After a bit of digging we found an account of the show in Portsmouth from an American newspaper in the Cody archive: www.codyarchive.org.

It described how Sunday was typically very busy for the Wild West Show organisers, and this visit to Portsmouth was no exception. After wrapping up in Bristol on Saturday evening, the whole camp was broken down into some 76 railway trucks – making up three whole trains – to make the journey south.

It wasn’t the most straightforward trip, however, as the cargo arrived at 2pm – despite originally being expected to roll into Portsmouth before 6am…

The delay was of no concern to the Indians involved in the show, however, as there would be little to take their attention between pitching their wigwams (a process that took less than 10 minutes) and that evening’s entertainment.

It wasn’t just Indians featured in the show, but also cowboys, Dutch people, Scots and a cockney – of which “the show would not be complete”, according to the US newspaper. In total, some 250 people travelled with the Wild West Show – as directors, managers, interpreters, agents, housekeepers and chefs took their place alongside the performers.

Animals were in plentiful supply too. There was a large pen for buffaloes (which the newspaper report said: “seem to never tire of eating, but who yet defy even Buffalo Bill to bring them to a state of tame subjection”), alongside paddocks for horses – separated into broken and unbroken.

When it came to eating, the menu was as hearty as you’d expect – especially when considering the importance that management put on keeping staff well fed and adequately provided for. During a tour of the kitchen, the journalist saw sirloins and ribs of beef; loins, legs and shoulders of mutton; huge pieces of corned beef; hundreds of tomatoes and huge volumes of potatoes being cooked. There was also a great variety of tinned meats; boxes of eggs; a load of hams and plenty of pickles and sauces – plus beer, whiskey and brandy to drink.

Though food was prepared en masse, dining areas were separated for tribes and races – as Indians were said to not want to eat with cowboys, whilst Mexicans would rather dine amongst their own people than with the English.

On a tour of the site, General manager Major Burke remarked how the central arena was rougher and contained more ruts than was usual. He wasn’t overly concerned, though: “Never mind, it will make the bucking all the more exciting!”

He had every reason to be excited, with the arena set up with seating for 15,000 people, to enjoy the Wild West Show before it packed up and headed off once again to the next town.