Collections and stories 80th anniversary of the Blitz

Portsmouth Libraries and Archive Service holds a series of air raid reports that are a moment-by-moment record of German air raids on Portsmouth. They were mostly written by staff manning the telephones in the Air Raid Precautions control room. Here we will look at some of these messages for the night of 10-11 January 1941, when the worst air raid on the city took place. In the messages we see events as they unfolded and people responding as the events happen. 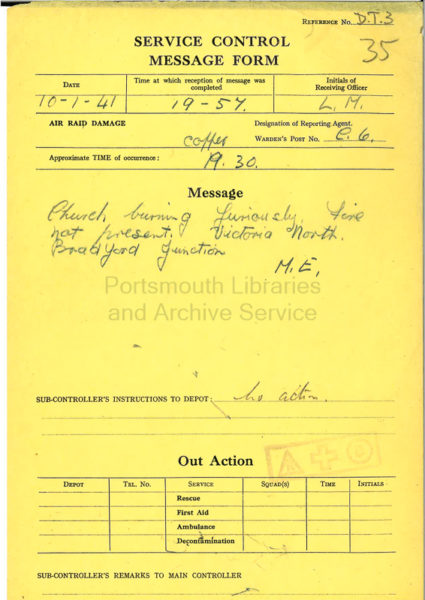 In the mayhem it was often difficult to send messages; there wasn’t always an ambulance or rescue squad available to send when needed. As you read the reports, it’s easy to find yourself thinking ‘How would I have reacted?’ or ‘What would I have done?’ And it all happened in streets we know today, streets now strangely quiet because of the lockdown.

Messages based on these reports will appear on Portsmouth Museum’s Twitter feed on the 80th anniversary of the raid, around the time of day that the particular event happened. We aim that these messages will give the reader some sense of what it was like being in Portsmouth during the air raid. 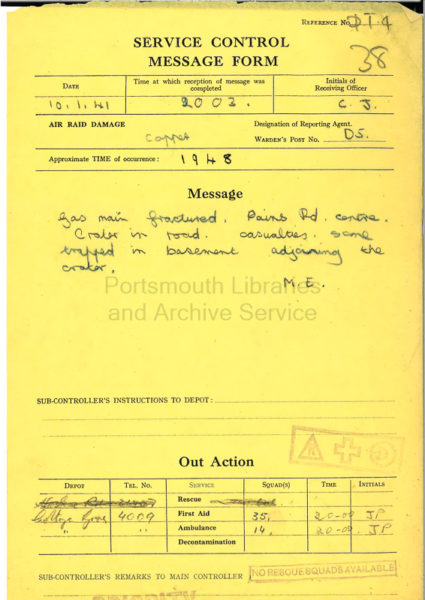 The air raid reports are part of the Libraries and Archive Service’s collections and can be viewed at the Portsmouth History Centre in the Central Library. There are similar sets of reports for the other air raids on Portsmouth, as well as other material about the work of the air raid wardens.

The reports were written immediately the news was received, so that help could be sent – firemen to put out a fire, an ambulance to take people (including a pregnant woman) to hospital, a squad to rescue people trapped by debris, a bomb disposal unit to defuse an unexploded bomb… The reports are brief, and were clearly written down quickly. 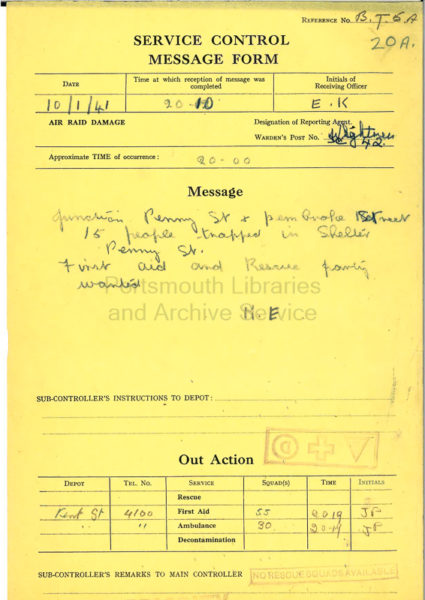 They usually give the time when the information was received, and also the time when help was sent. At the height of the raid – between 7pm and 11pm – there was often nobody to send for a good while. Getting to the site of the incident was often difficult too – roads were blocked by debris or by bomb craters, or were barricaded because buildings were unsafe.

At one point there is a report that they have run out of fire hose – so they can’t put the fire out. The reports show the fires spreading, for instance the fire at Handley’s department store in Palmerston Road.

There are gaps in the reports – there is almost nothing about Commercial Road, and there are no reports relating to the fire which gutted the Guildhall. Sometimes this may be because the reports have not survived, or because an air raid warden may well have just responded, without sending in a report.

In among the reports there are human details, like the woman who refused to leave her bombed house, and the report at 2am that 80-100 people in a shelter on Southsea Common have lost their homes because of the raid and now need to be taken somewhere. Altogether the reports give a vivid picture of what it must have been like here during the raid, and the sheer terror people must have felt.

Part of PortsmouthBlitz80, a project by Portsmouth Libraries and Archives Service, and Portsmouth Museums.